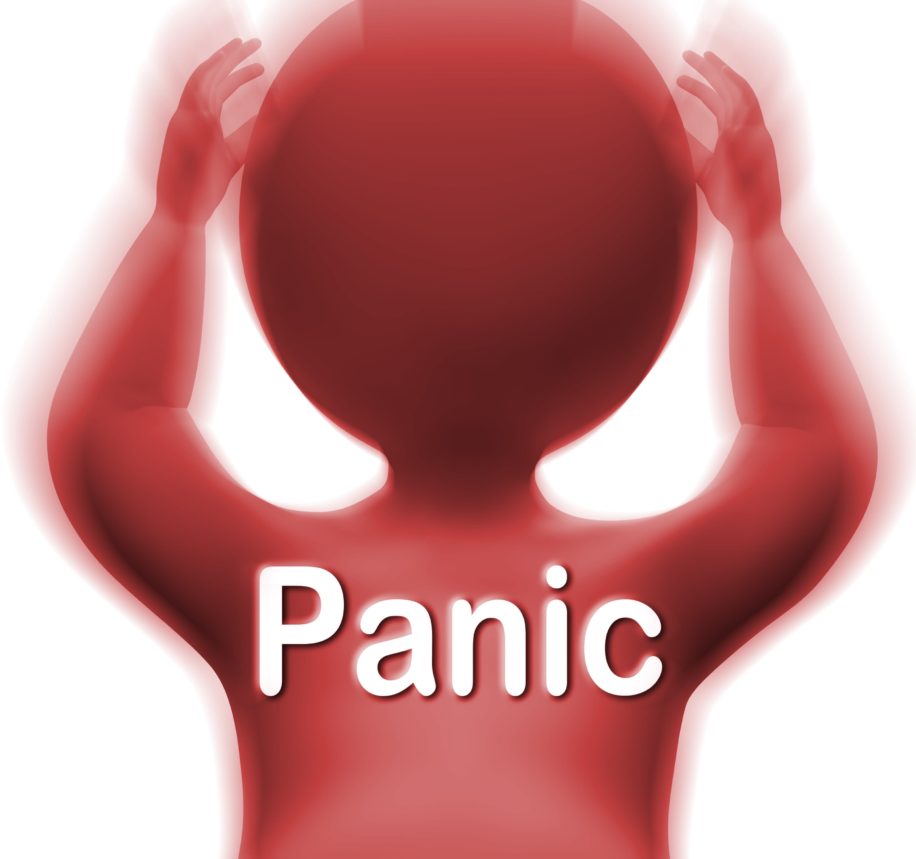 One of the scariest experiences in life can be a panic attack.  Anxiety is no fun but at least there’s a sense that something might or might not happen in the future.  In a panic attack something terrible is happening right now.   Panic attacks mean having your world unexpectedly turned upside down, with a surge of terror that feels never-ending. Your insides are screaming that you’re going crazy, you’re having a heart attack, or you can’t breathe but you may have a hard time knowing why you feel so scared.  It can be a shattering experience.

Panic attacks are not uncommon

“Harry was a 25-year-old sales professional who prided himself on his ability to build rapport with his clients.  He had a very affable way about him and people gravitated towards him.  One night at 7:15pm he made a call to one of his clients who began telling him about a family fishing trip.  Harry’s thoughts started wandering towards other things in his own life, while continuing to show verbal interest to the client’s story (“uh-huh’s” and “wow”, etc.).  Out of the blue came a tightening in Harry’s chest.  He felt like he was having trouble breathing.  The physical sensation seemed too real to ignore – something really dangerous must be happening.  His thoughts began to swirl: “what’s happening to me?  Am I having a heart attack?  How am I going to keep talking to this client when this is happening?  What will the client think if he knows I’m going through this?”.  The client asked Harry a question and Harry answered “sure” but it was clear that Harry was not listening closely.  Harry asked the client if he could call him back…”

Of course, Tony Soprano provided one of most iconic examples of panic:

Some of the symptoms – like his collapse at the end – are more geared for Hollywood dramatic effect than what usually happens.

The story of Harry – and Tony – is not uncommon.  Many people who otherwise feel together in their private and personal lives have sudden and unexpected panic attacks in these kinds of situations.  The first time it happens can be terrifying and confusing.

So why do panic attacks happen?

Ever heard of the fight or flight response?  I’m sure you have.  It refers to the set of physiological changes (e.g.  surge of adrenalin, increased heart rate, sweating, rapid shallow breathing) that get you ready to fight or flee a threat.  When we are carrying around a higher level of stress than usual, some of these fight-or-flight symptoms can occur behind the scenes.

In the example, above, it turns out that Harry was having marital problems that led an increase in his stress level.  His wife was upset about how often he worked late.  Harry’s body responded to this stressor by breathing more rapidly and shallowly but nothing so great as a panic attack.  But this increase in his baseline level of stress set his body up to escalate into fight-or-flight mode when he found himself bored on a work call while knowing that this task was keeping him from getting home at a reasonable hour to his wife.

OK, but how does the fight-or-flight response lead to full-blown panic?

Once the fight-or-flight response has been triggered, we are trained to look for and find the danger.  In the case of panic attacks there is no external danger so the mind turns inward to find the danger: “this light-headedness means that I’m dying”, “being this scared means that I’m crazy”, “I can’t breathe”, etc. Our physical sensations get linked to danger.  The stronger this link becomes, the worse panic gets.

How do I stop panic attacks?

The good news is that panic attacks are very treatable.  The most important part of treatment is learning the process described above – no matter how certain we feel that our inner sensations are dangerous during a panic they really are not.  Furthermore, the nervous system cannot stay anxious for longer than ten minutes.  After that, a different nervous system kicks in – the one responsible for relaxing us and bringing us back to a state of equilibrium.  So, if you can stay mindful during a panic attack that your system is looking for – and making up – signals of danger eventually the fear will pass and you will come back to a state of ease.

Like all anxiety problems, the solution is not to avoid the experience of anxiety, but rather experience it from a different perspective.  One important aid is to engage in Diaphragmatic Breathing because this can hasten the activation of the relaxing nervous system.

Jay Reid is a Licensed Professional Clinical Counselor (LPCC).  If you are experiencing panic attacks and would like to find relief, psychotherapy can be very helpful.  Please  contact me for a free 15-minute phone consultation.