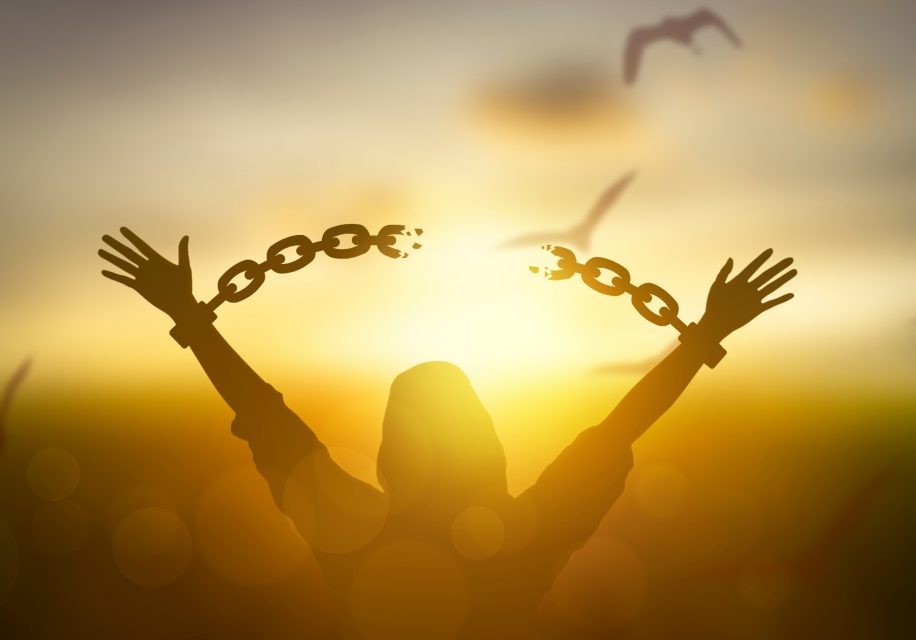 Do you fear that if you listen to what you’re unhappy about in a relationship that it will be impossible to be happy with anyone?

Do you fear a terrible retribution, comeuppance, or profound humiliation if you dare to move away from a friend or partner who is treating you poorly?

Does it seem like having someone there is a lot more important than expecting them to treat you the way you want to be treated?

Today’s blog post falls under the category of ‘Gaining distance from the narcissistic abuser’.

An important part in being able to gain distance from a narcissistic abuser is taking care of yourself.  To that end, I’ve created this free webinar that offers 7 self-care tools to help you in the process of recovering from narcissistic abuse.  You can find the link here.

As I’ve stated, a narcissistically abusive person feels a deep and often unconscious sense of worthlessness that they can’t tolerate and cope by insisting on the opposite: that they are worth more than others.  Then they expect and influence others to reflect back this inflated view of their self-worth.  Last, they lack empathy for the feelings of others as this would get in the way being able to seamlessly use others to prop up their inflated self-esteem.  So being in relationship to such a person is a real one-sided affair.

Now let’s contrast this with what an attachment bond looks like for a child born to a good enough or non-narcissistic parent.  For this child, the parent has a non-possessive curiosity, compassion for, and desire to facilitate the growth of the child’s mind and developmental strivings.  The parent is happy when the child is happy with him or herself.  There is an implicit separation between the parent and the child’s mind and the parent maintains and respects this boundary.   This parent also manages their own emotional well-being fairly well and is therefore available to the child as a resource to help the child manage his or her own.  You’ll notice that the child does not face any sort of threat of annihilation nor abandonment in any of this.  Sure there are moments of frustration for the child in relationship to the good-enough parent but these are infrequent and tend to be repaired by the two of them.

An author named Joseph Schwartz wrote an academic journal article that clarified the difference between an attachment bond vs a trauma bond and I found it immensely helpful: 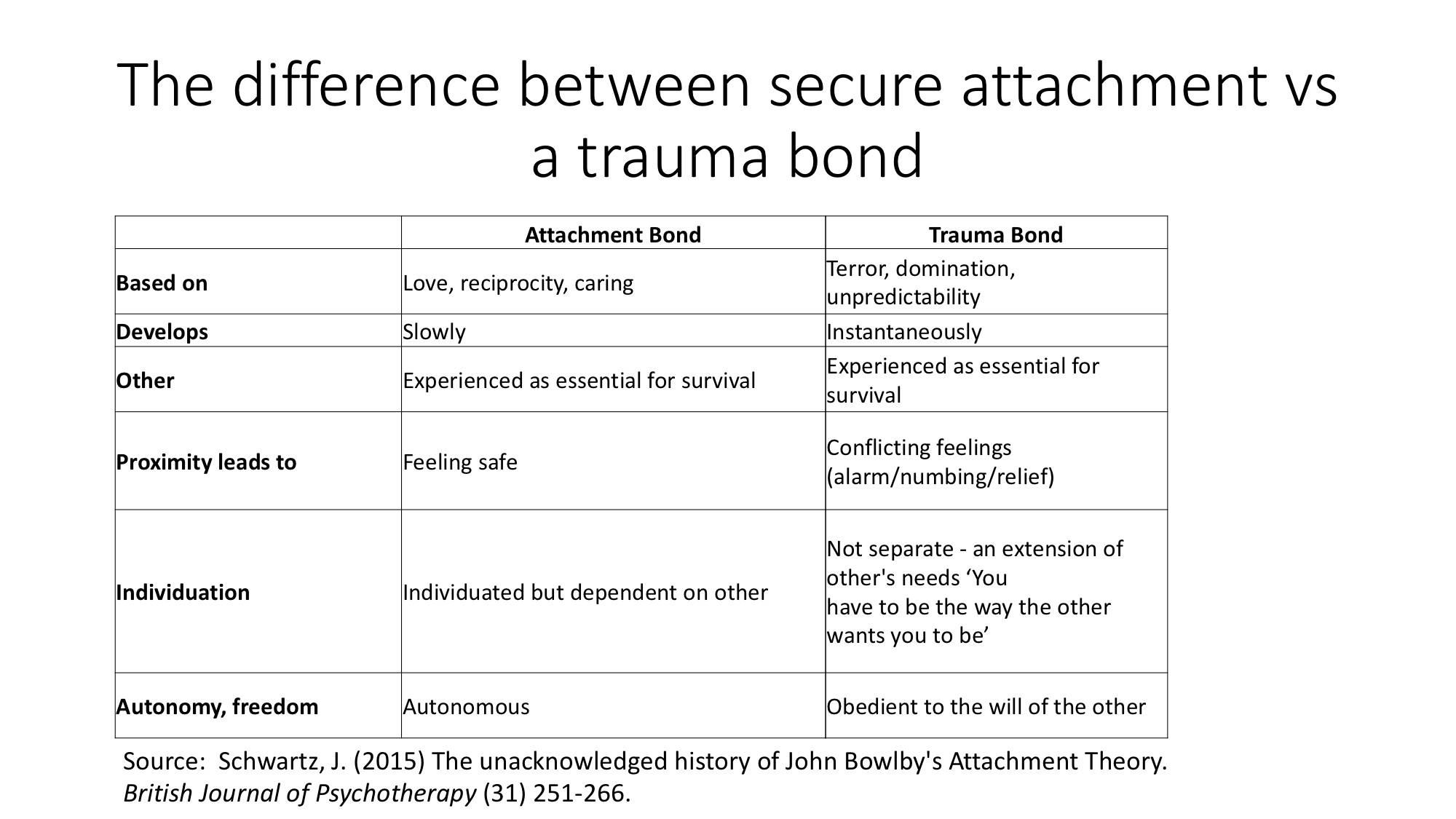 There’s a movie that does such a great job of illustrating the difference between an attachment bond and a trauma bond.  It’s called Gone Baby Gone and it has Casey Affleck and Bridget Moynahan as neighborhood detectives who are helping police detective played by Ed Harris solve a case of a missing girl who was kidnapped from a woman in the neighborhood who was known to use and traffic drugs and the movie makes it clear would routinely neglect and endanger her daughter.

I don’t want to be too much of a spoiler here but in the end it becomes clear that her kidnapping was orchestrated by the chief of police played by Morgan Freeman and assisted by Ed Harris the detective so that the child could be raised by the police chief and his wife who could offer her a loving and safe upbringing.  Casey Affleck was steeped in the Catholic church and had a real ‘Honour Thy Parents’ outlook.  So when he discovers that the girl was actually living with the police chief’s family he’s in a moral dilemma of whether to return the girl to her biological mother or let her continue living with the police chief’s family where she seemed very happy.  I won’t say what he does, but encourage you to see the movie if you haven’t yet.  It’s really great.

In Gone Baby Gone the moral dilemma is whether to return the kidnapped girl to her biological parent whom she may share a trauma bond or let her stay with people who have treated her well enough that she seems to be developing an attachment bond to.  I know how most of you watching this channel would vote as to what should be done – including myself!

For the person who had to forge a trauma bond to a narcissistically abusive parent, it is imperative that they learn to ignore themselves.  The child in this situation learns that paying attention to him or herself results one of the two traumas: annihilation or abandonment.  No one else is benignly paying attention to the child, so for the child to do this and expect the same from without only results in profound and utter disappointment.  The resulting feelings can feel unsurvivable to the child so it’s adaptive to find a way to pay less attention to oneself.  In fact, the child who had to forge a trauma bond to a narcissistic parent may even find it difficult to recognize his or her self in the world.  Life can feel passable so long as they are not aware of themselves.  Furthermore, being aware of themselves can interfere with doing what’s necessary to maintain the trauma bond to the narcissistically abusive parent.

This is why being traumatically bonded to a narcissistic abuser can make gaining distance so difficult for the survivor.  The premise of recovery from this kind of abuse involves paying attention to oneself.  Yet, it’s this act of paying attention to oneself that can feel like one is inviting the very traumas one has been seeking to spare oneself all one’s life.  You may have had to keep your focus on what is going on around you – at all costs – in order to stave off the anxiety or even terror that would flood in otherwise.

The warning signals from the lessons of the trauma bond that can flash are feeling completely unjustified in considering separating from the narcissistically abusive parent or family, wondering if you’re making all of this up, etc.  Another common fear at this point is that if you pay attention to yourself and what you like vs don’t like in relationships that you’ll never find someone whom you’re satisfied with.  This concern can seem very reasonable yet directly mirrors the dilemma faced earlier in life: if you decided you weren’t happy with your narcissistically abusive parent then you would have been left with no one to attach to.

I don’t think these concerns are necessarily what they seem at face value but rather serve the function to keep one in the only kind of bond one has known in one’s life – the trauma bond to the narcissistic abuser – AND to not do the thing – pay attention to oneself – that would have gotten you either destroyed or left before.

So what can be done to help you break the chains of the trauma bond and progress towards an attachment bond with yourself and others?

You know, this week, in the facebook group that accompanies my online course for recovery from narcissistic abuse, I ask members to post moments of progress they noticed this week and that it doesn’t matter how big or small.  One member posted that they had a difficult week but also that they have come to accept when life feels this way and have noticed that they have made significant progress when measured in months and years.  I thought this really encapsulated the kind of attitude towards oneself and one’s recovery that is so important to cultivate.

That being said, one way to gradually and compassionately help yourself out of the trauma bond is to make it an intention to pay attention to yourself throughout your days.  Practices like the self-care tools in the webinar I mentioned, or connecting to your bodily experience via a daily yoga practice can be very helpful in this regard.  Engaging in these activities puts you in the center of your attention.  And it may not work right away but with continued efforts to center yourself in your own life, the window with which it feels safe to do so can get larger and larger.