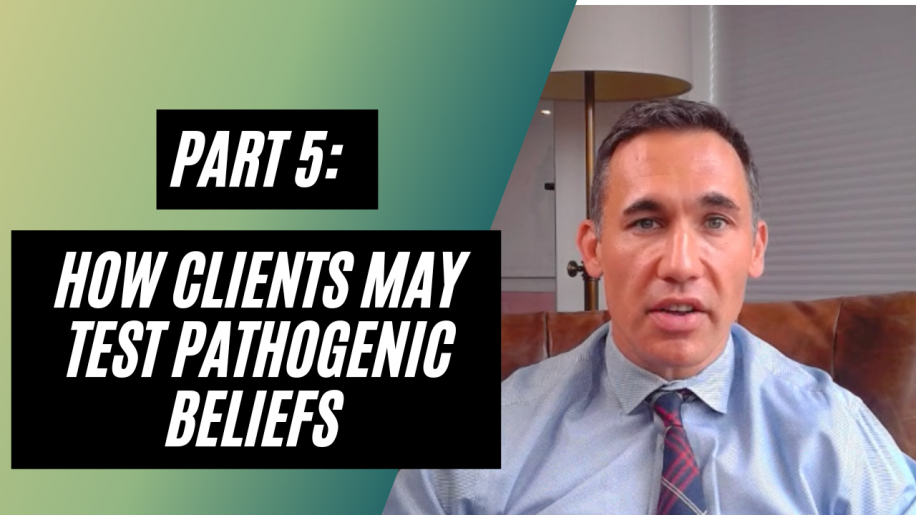 As a therapist you have almost an infinite amount of choices in each moment as to what to pay attention to, how to respond and what to emphasize to your clients.  Theories of therapy give therapists a strategy for how to do this in a way that should be helpful to the client.  One aspect of Control-Mastery Theory that I really like and find effective is the idea that clients will find ways – often unconsciously – to test whether their pathogenic beliefs apply in the therapeutic relationship.  And they can do this in all kinds of ways but if you have a good understanding of their goals, pathogenic beliefs and key traumas then you will be in a good position to catch these tests and pass them.  In this post I’ll give an example of how Sarah tested her therapist in her therapy, explain two different types of tests, and describe how you can know if you passed a client’s test.

This post is the first in a series on CMT and how you can learn to apply this theory in your own clinical work.  It’s a 6-part series that covers these topics:

This series is about CMT in general.  If you want to learn more about how to apply this form of therapy specifically to survivors of narcissistic abuse then check out my 3-hour online course on the topic.

My name is Jay Reid and I’m a licensed psychotherapist in California who specializes in the treatment of survivors of narcissistic abuse.  I work from a form of therapy called Control-Mastery Theory which prizes the client’s efforts to overcome the trauma of narcissistic abuse and realize a fuller and richer quality of life for themselves.  If this topic interests you then I encourage you to learn more by getting my free e-book on ‘Effective Therapy with Survivors of Narcissistic Abuse: The basics of Control-Mastery Theory’

Before talking too much about testing, I’ll provide an example of it so that the concept becomes a little more clear.  Sarah was introduced in the first post of this series.  She came to therapy complaining of anxiety, feeling empty and depleted and stressed.  Her therapist inferred that she coped with the key trauma of having a depression-prone father who threatened to be completely unavailable to her by adopting the pathogenic belief that if she does not take responsibility for others’ emotional wellbeing then they will fall into depression.  He determined that she held the goal of engaging in an exercise she enjoyed regularly because that would reflect her putting her own emotional wellbeing first in her life.  This information informed how her therapist listened to Sarah.

Sarah started therapy by criticizing herself for not being more attentive to her husband who seemed emotionally fragile and constantly on the verge of panic attacks.  He refused to seek treatment or medication for his condition and Sarah was consistently preoccupied with his wellbeing.  Her therapist held the hypothesis that her husband reflected Sarah’s compliance with her pathogenic belief by choosing a partner who seemed to be on the verge of falling apart if she were not tending to his wellbeing.

Her therapist inferred that Sarah’s claims that she was to blame for not taking good enough care of her husband were a test of her pathogenic belief.  The test was to see whether her therapist would go along with her pathogenic belief or not.  That is, would he agree that she was responsible for her husband’s emotional wellbeing or would he promote her efforts to address her own wellbeing.  Her therapist responded initially by asking whether her husband had taken initiative to get professional help for his anxiety?  Sarah said he had not and her therapist then asked how that was for her?  Sarah initially said, “Well what does it matter what I want?  He’s in need and I’m the only one he trusts to help him.”  Her therapist responded with, “Well from my vantage point I see one partner who is suffering – your husband – but is not being a participant in his own rescue by seeking therapy for himself.  Then you seem to understandably feel responsible for his wellbeing and suffer because it’s a constant job to keep him afloat.  And again from my vantage point that doesn’t seem fair to you.”  Sarah sat back in her chair and it looked like a balloon had been let out inside of her.  She seemed immediately more relaxed and said, “I never think about myself with him and it’s so hard.”

In this example, Sarah tested her pathogenic belief by expressing an attitude towards herself that was in compliance with that belief – that she wasn’t taking good enough care of her husband.  Her therapist took the position that countered this belief by advocating for her right to take care of herself even if that left her husband to take care of his own emotional wellbeing.  We can infer that her therapist’s response passed Sarah’s test from her seeming less stressed and bringing up content of how hard it has been for her to be the one doing all the work to keep her husband’s anxiety under control.

Transference tests are efforts by the client to act as they would have with their traumatizing caregiver to see if the therapist will respond differently (1993).  Sarah conducted a transference test to see if her therapist would challenge her compliance with her pathogenic belief or endorse her abandoning her needs to take care of her husband.  The bulk of tests in therapy are transference tests.

Later Sarah conducted a transference test by not complying with her pathogenic belief.  She came into therapy and said that she told her husband if he did not find a therapist by the end of the month she was not going to be available to him if he wanted her to be with him when he was anxious.  Her therapist emphasized how she seemed to be acting as though her needs were as important as her husband’s.  Sarah again appeared more relaxed and expressed how she initially felt a little guilty but then felt like a burden had been lifted to tell him this.

Passive-into-active tests are the other form of testing.  They are outside the scope of this post series but I describe them in my 3 hour course on Effective therapy for survivors of narcissistic abuse.

There are several ways that a therapist can know if he has passed a test. The client may “demonstrate greater confidence in the therapist, a sense of relief, greater insight, or more boldness” (Weiss, 1993, p. 84). The single most important indicator of a passed test is that the client gets better. Getting better can be defined in a lot of ways. Generally, if a client seems more emboldened to live as s/he yearns to live – a test may have been passed. These signals provide iterative feedback whether the therapist is on the right track.  In contrast, when a client stops their train of thought after a therapist’s intervention that is often the sign of a failed test. Similarly, a failed test may precede clients becoming less engaged in the therapy – showing up later than usual, forgetting to pay the bill, finding it harder to make use of the therapeutic hour, etc.