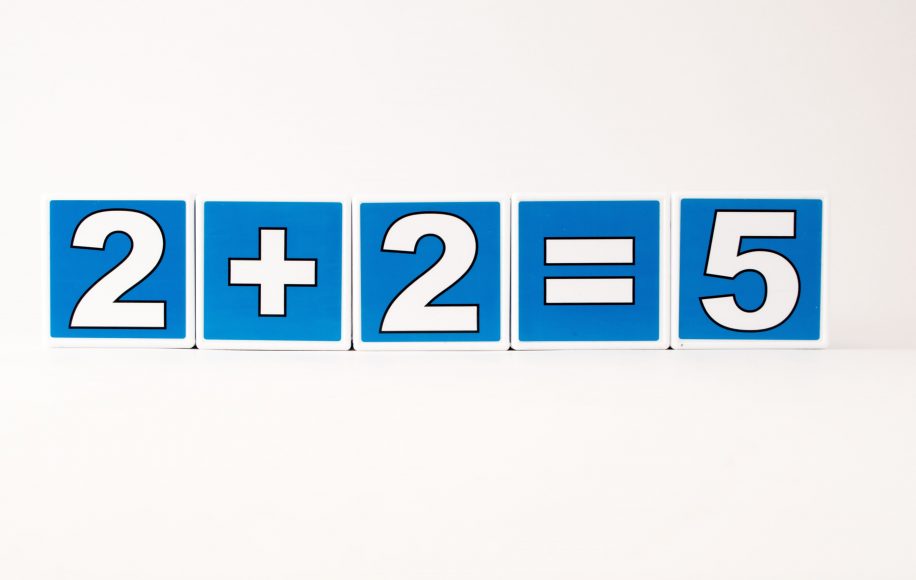 “In the end the Party would announce that two and two made five, and you would have to believe it.” – George Orwell 1984

I find in my therapy practice that there is nothing wrong with my clients except that they believe there is. People do not insist on a perception of reality that worsens quality of life out of stubbornness. Typically, believing they are defective helped to maintain a very important relationship early in life. Click here to read about why maintaining ties to parents is required for psychic survival. If a kid is not convinced that his parents love him as much as he needs then he will adapt in ways designed to get them to want to be there for him. Such a kid can and will do an amazing amount of shape-shifting to get the parent to be willing to care for them. Here is an example: if an otherwise depressed father consistently yells at the kid for not picking up his toys, the kid may infer that Dad feels better when he can yell at the kid. So, the child may unconsciously fail to pick up his room so that Dad can feel less depressed and be more available to him as a parent. Of course, there’s tremendous cost to the kid who has to conclude that he’s inherently messy, immature and undeserving of protection from verbal abuse.
The quote from the book 1984 (2+2=5) above applies because kids can get put in this situation if you substitute ‘Party’ for ‘Parents’. Kids have to believe in equally outlandish yet demanded claims such as:
Time and again these kinds of beliefs are implicitly and explicitly stated in therapy when they have little to no support in how the same person lives his/her adult life. That is, people may pursue lots of activities designed to bring happiness, or surround themselves with partners and/or friends who care for them, or be extremely successful professionally yet still feel coerced to believe the contrary.

Wait, you mean I cannot trust what I think or feel about myself? A lot of times, No!

It’s a tricky thing to claim that sometimes we should not trust our perceptions of ourselves but when those perceptions are governed by a self-limiting belief then distrust is warranted. It can be unsettling, however. We can’t go around questioning the assumptions that give us a coherent sense of ourselves all the time or we’d become puddles of angst. In therapy the idea is to provide enough support and safety to selectively identify and challenge perceptions and beliefs that defeat oneself and are patently false.

Therapy does not involve a therapist being right and the client being wrong.

If a therapist believes that a client is harmfully distorting his perception of himself then challenging that perception will usually be – at some level – welcomed by the client. Signs of such a welcome include: increased vitality in the client, spontaneous insights by the client and/or improved quality of life outside of session. So, yes, a therapist may challenge a client’s claim that he or she is defective – however it’s stated – but that challenge is only with the client’s best interests at heart.
One analogy that comes to mind is during the 1970’s when homophobia was rampant and many clients with homosexual desires came to therapy looking to be cured of their “pathology”. They were forced to believe that being homosexual was wrong and perceived themselves in ways that complied with that belief. A forward-minded therapist might gently question such a client’s stated desire for ‘curing’ himself and wonder if he could think of any benefits about accepting himself just as he is. Although the client may say that he needs to change, it is likely that the client feels safer that the therapist is not going along with the client’s homophobic perception of himself. So, a therapist who challenges a client’s perception of reality is not a bearer of bad news like “It’s worse than you think it is”, but rather “It’s a lot better than you think it is”.

Let’s take a look at a case example:

Terrence came to therapy and complained of his ‘laziness’ and inability to ‘make good decisions’, despite being an accomplished software engineer and establishing a full life in San Francisco after moving here overseas. He lamented that he was not ‘as far along as I should be’. In the first few sessions, Terrence was fairly serious and intense in how he spoke and interacted with me. On the surface he was seeking a fix for being lazy and misdirected.
In my training, a Bay Area psychologist gave me some advice that has stayed with me ever since: “Be careful where you place your therapeutic allegiances”. For a therapist this means that what a client initially communicates verbally may not be exactly what they are seeking from therapy. Terrence presented me with two possible ways to respond: 1) take him at his word and set about developing skills etc. that might stop him from ‘being lazy’ or 2) explore his assumption that he is lazy and see if that might be something he no longer wants to believe about himself but feels as though he has no other choice. I chose – and tend to choose – the latter tact:
I learned that Terrence was the youngest of two brothers and his parents consistently told him that he was not as talented as his brother. He said that his parents expected him to excel academically with ease. If he felt any despair or anxiety about the outcome of a test or course his parents would ask him: ‘why do you have such low self-esteem?’. His parents would also tell him that he was not focused enough at his current job and that he should find a girlfriend soon.
Terrence’s parents held an attitude towards him that there was something wrong with him. If Terrence protested then his parents would pathologize him (e.g. ‘why do you have such low self-esteem?’). His only option to keep a relationship with his parents was to unconsciously comply with their attitude that there is something wrong with him. He could feel connected to his family but only if he believed that he was defective.
This is exactly why it is important to be careful where to place one’s therapeutic allegiance with clients: if I had collaborated with Terrence in combatting his ‘laziness’ I would have been reinforcing his parents’ inaccurate and demoralizing view of him. By identifying his attitude towards himself as someone who’s defective and making that the target of our therapy I believe he was able to get what he really wanted out of therapy.
After putting together Terrence’s current complaints with his history I suspected he might not really believe that he is lazy and unable to make good decisions. I did not pay as much attention to his assertions about his ‘defects’ and emphasized points in his narrative that contradicted these claims – such as the positive feedback he consistently earned at work and positive responses from new friends. Together we understood how his parents’ myopic view of him was factually inaccurate. He developed a new understanding of himself as someone who is much more capable and fun to be around than his parents had ever known him to be. After several months of working together in this fashion, Terrence became more alive, funny, and playful in and out of sessions. He continued to enjoy successes in his work and relationships but no longer believed there was ‘anything wrong with me’.
Terrence’s therapy illustrates how his belief that there was something wrong with him defined his reality yet was patently false. Believing he was lazy and defective was as truthful as believing that 2+2=5. My attitude towards him that there was in fact nothing wrong with him and a lot right with him – gave him a sense that it was OK to question and disconfirm the idea that he’s lazy – or to see himself more accurately.
Jay Reid is a Licensed Professional Clinical Counselor (LPCC).  If you are interested in therapy for the type of issue described in this blog post, please contact me for a free 15-minute phone consultation.